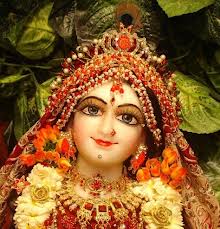 Radhastami is the appearance anniversary of Srimati Radharani. She is Krishna’s greatest devotee, the feminine aspect of the Absolute Truth, and Krishna’s spiritual energy personified.

Bhakti Caitanya Swami was born on August 14th 1951 in Auckland New Zealand. His first contact with Krishna consciousness was while at university in Auckland where on the university grounds he saw devotees throwing flowers at the lotus feet of Srila Prabhupada while Srila Prabhupada was walking. In 1972 Bhakti Caitanya Swami left New Zealand to make an extensive world tour and met ISKCON devotees in London and later joined Srila Prabhupada’s International Society for Krishna Consciousness. After taking initiation from Srila Prabhupada, he became involved in public relations and book publications for the Bhaktivedanta Manor (ISKCON’s British Headquarters). In 1980 he went to South Africa to oversee ISKCON’s activities as Temple President at Cato Ridge and to help with the overseeing of the construction of the Sri Sri Radha-Radhanatha Temple project.

Read more about Radhastami from a lecture by Srila Prabhupada